Taylah was just 3 weeks old when I was getting ready to go to a friend’s funeral in Wagin, in country Western Australia. It was around lunch time when I noticed Taylah’s colouring was a little pale. But by the end of the funeral service Taylah had turned a blue/grey colour. Her soft spot on her head (fontanelle) was swelling and was getting harder. She wouldn’t respond to a cold can on her foot. Fortunately I was near a Doctor’s surgery and I ran her in to see the doctor immediately. The Doctor wasn’t sure why her fontanelle was so enlarged and we thought her brain was going to pop! The doctor rang the local hospital about 50 kilometres away. 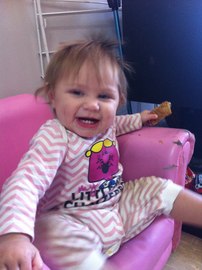 We drove to the hospital where the doctors were waiting for us and they took one look at Taylah and said she had meningitis. I freaked out! I had never heard of this disease and didn’t know why her eyes were rolling back and why she was so lifeless. The doctors told us she needed antibiotics otherwise she could die. They couldn’t put a drip in her arm so they had to put a drip in her leg.

Within half an hour the Royal Flying Doctors were taking her to Perth. She was transferred to the Intensive Care Unit (ICU). They put my little girl into an induced coma and I thought there’s no way Taylah will survive! The doctors conducted so many tests. She was on a drip to fight off the bacteria. I sat at her bedside for 3 days straight. I was told to go home so I could sleep properly, but I would arrive back every morning to check on my little girl. 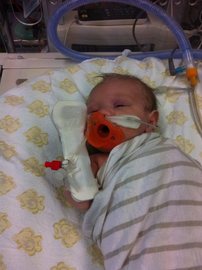 She remained in a coma for 7 days, her brain swelling had reduced. We were warned by the doctors that when she woke up she may not be the same little girl before meningitis and may have some side effects from the disease. The nurse said to me “Taylah’s a little fighter and someone up there is watching over her.” With that, I took a deep breath and whispered to Taylah they we were going to take on the world. They reduced her dependency on the respirator and she started to breathe by herself. The doctor’s left her on oxygen for a couple of days. But on the first day of waking up she was trying to pull out the nose cords. Little rascal!

We were then moved out of ICU and into a ward where we stayed for another 4 weeks. Taylah had some tests done and they found she had a hearing problem and needed a hearing aid in her left ear. But that is the only side effect so far.

I cannot thank the doctors and nurses in the country and Perth for all their help and for saving my precious Taylah! A year has passed and she continues to take on the world.