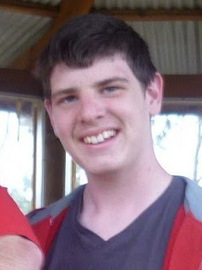 Follow Cameron's life after pneumococcal through his Mum's eyes...

Cameron's Pneumococcal story
April 3 1996 changed our lives forever, it is the day that we lost our hopes and dreams as first time parents and started a completely new journey.

Our little boy was 5 months old and developing normally. He had a cold a few weeks earlier but nothing that alarmed anybody. Then he started to become very unsettled, we thought he was possibly teething.

One morning he woke up very late and something was not right, his eyes just stared at me and when I picked him up he cried in pain. I changed his nappy and there was blood in his nappy. After an initial panic we took him to the doctor who after consultation with a paediatrician concluded that Cameron had developed a bowel infection. We were sent home to try and get his fluids up and collect a stool sample. After another visit to the doctor because Cameron wasn't drinking at all and was now feverish and had diarrhoea, we were sent home for the night to see how he went.

That night was horrendous, Cameron spent the whole night arching his back and screaming a distinctive scream that I never want to hear again.

First thing in the morning we were back at the doctors and it was decided that Cameron was at risk of dehydrating and we should take him to hospital. We were living in a little isolated mining town, 4 hours north of a major centre with a regional hospital. We were a low priority for RFDS so it was decided that it would be quicker to drive ourselves than wait for a plane.

Half an hour out of town we stopped to give Cameron some pain relief medication and he slipped into a seizure and coma whilst lying in my arms. We had to make a life and death decision, do we go forwards or backwards. Fortunately for Cameron we decided to go forwards and that decision saved his life.

45 minutes up the road was another town with a small hospital. We pulled into the hospital and handed Cameron over to a doctor. That was the last time we held him for several days. This doctor suspected Meningitis but didn't have the correct drugs to treat him. He stabilized him and we were flown to the regional hospital.

At the regional hospital Cameron's body started to lose the fight. He stopped breathing several times but I poked him and he took a breath. Later as medical staff prepared him to fly to the states children's hospital he completely gave up and stopped breathing. Thankfully everything was at hand and they resuscitated him.

Once again we moved on and ended up at the state children's hospital where we were immediately admitted to ICU. By now it was midnight and finally we had a diagnosis - Pneumococcal Meningitis.

We spent 10 days sitting by his bed in ICU as he fought to stay alive. Day three was the worst, when he had seizures all day. We had finally been allowed to hold him and then he had a seizure in my arms. I was too scared to hold him for the rest of that day and even got too scared to watch him as his little body endured more seizures.

When Cameron could come off the respirator and was breathing by himself we were moved to the infants ward and that became our home for 2 months. He didn't wake up until the day that we were told that, although they had seen worse cases survive it wasn't looking good. Cameron opened his eyes, as if to say, I'm back!

On day two of this journey the hospital ran tests to see what brain damage had been caused by the seizure which had lasted all day, on day one. It was extensive, as non medical people; we could easily see all the dead brain tissue on the scans. Eventually it became clear that Cameron had also lost the hearing in his right ear, his right eye wandered, he had epilepsy and he had lost all of his bodies muscle control.

Once Cameron woke up our focus changed from saving his life to starting his new life. He was no longer the little boy who we had nurtured for 5 months it was as if someone had placed a different baby in our arms.

We started intensive therapies which still continue today, 17 years later. My mother stood patiently for 2 hours and, with a dummy, taught Cameron how to suck. He was pale and puffy from all the drips and drugs he had been given. Surprisingly though, one thing never changed, the strength in his hands. He would hang onto your finger with incredible strength and I think it was that strength that saved his life.

When we were told that Cameron had Pneumococcal Meningitis we were shocked and totally uneducated. What was Meningitis? How do you spell it? The only time we had heard of meningitis was as children because there had been news reports of children contracting amoebic meningitis from swimming in stagnant water.

We became obsessed with trying to find out what was wrong with our baby and why it had happened. In the parents rest room we found pamphlets from the Meningitis Centre and they answered a lot of our questions. It gave us peace of mind that there were other people out there who had been through something similar to us. We were not alone.

Once we moved into the infants ward we contacted the Meningitis Centre and asked for some peer support. We were put in contact with another parent who had a child who was affected by pneumococcal meningitis at the same age. She was able to give me some light at the end of a very long tunnel, I was going to survive and it would be okay, life would go on. She was living, breathing proof.

We are now further along in our journey and have adapted to our different destination. Now I give support to other parents who are at the beginning of that tunnel and are searching for some light. I also give talks to medical professionals, people in child related work places and parents on the impact that meningitis has had on our families lives. I believe if we can make meningitis real for people and put a face to it then hopefully more children can be saved or, if they end up on the same road as we are, that the professionals around them will have a greater understanding of the highs and lows of parenting a special needs child.